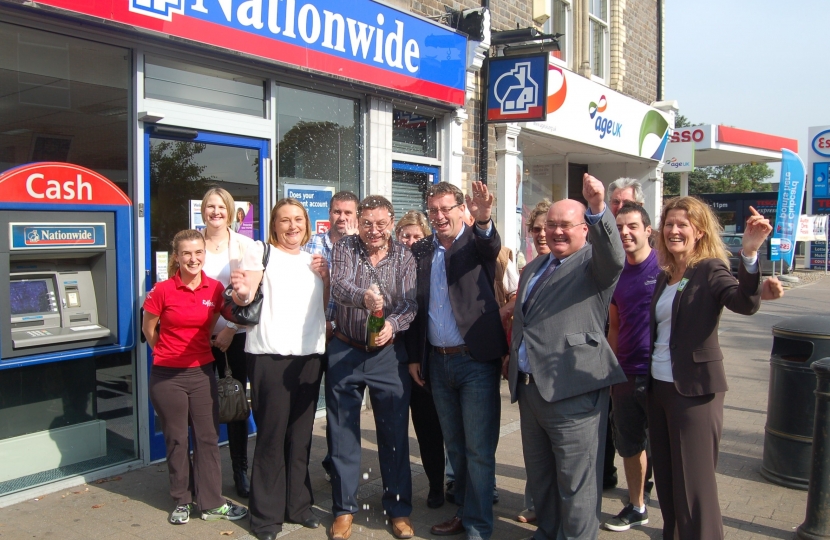 Rob said: “I have been in close dialogue with Nationwide for several weeks, impressing on the Building Society the seriousness with which I viewed their proposed closure of the Caversham branch.  We have had a constructive and ultimately positive series of conversations that mean the branch will continue to serve Caversham and also have an improved service offering.”

“This result would not have been achieved without the active support of the Caversham Traders Association, CADRA and the always magnificent Caversham public.  This is about people power giving me the tools to use robust but constructive persuasion to reverse the initial decision. I made it clear to Nationwide that Caversham would not support a company that did not support Caversham. I was due to hold two public meetings on Monday and Tuesday next week that would have set a countdown for customers withdrawing their accounts. Persuasion backed by united consumer action does tend to focus the mind. It demonstrates that communities can have enormous impact, even on big financial organisations, if they work together.”

“Obviously Nationwide will have its own view about why it reversed its decision and I’m not going to be churlish about the rights and wrongs of what happened, I’m just grateful we have the result Caversham wanted. Whatever the reason, the staff at the branch deliver a first class service that its customers really value. I hope old and new customers will now take advantage of the reprieve and actively use Nationwide services.”