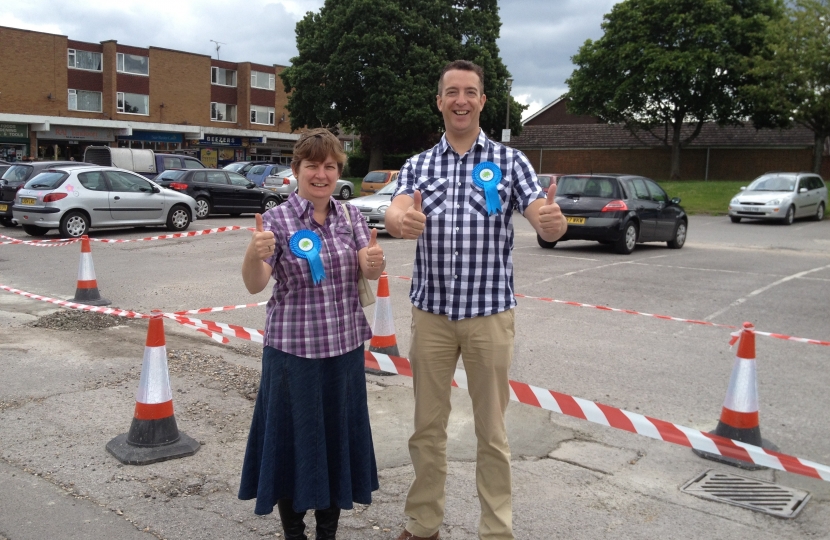 Peppard ward’s Conservative Councillors and Reading East MP Rob Wilson have spent considerable time over the last few years in contact with local shop keepers, managers of national chain shops, and writing to the managing agents, of the Budgen’s Precinct car park in Emmer Green. Last year the then owners set out plans to resurface the car park and cited a letter from Cllr Richard Willis in their planning application for repairs to the surface in front of the shops.

In July this year Mr Karim Rashid (the owner of Budgen’s shop in the precinct) bought the freehold of the car parkland and has appointed new managing agents. He proposesto comprehensively resurface the car park and improve the drainage before the winter sets in. However, this is subject to agreement of all the existing shop-keepers to pay their share of the costs. Mr Rashid has offered terms which would spread the burden for the shop-keepers, thus making it more affordable than the previous proposals which were never implemented.

Cllr Jane Stanford-Beale recently invited senior managers from a number of the national chains at Budgen’s precinct to walk the site with her. They were shocked at the state of the car park and have pledged to support attempts to bring it up to an acceptable standard. Cllr Stanford-Beale, said, “This is good news and will be very much welcomed by local people who use the shops. Despite periodic patching the car park has usually been riddled with pot-holes and dangerous for its many users. I met with some of the managers of the national chain shops and am pleased that they havepledged to support proposals to resurface the car park. Now we have to ensure that the plans are affordable for and supported by the smaller businesses.”

Cllr Richard Willis, who has campaigned for several years to get the car park repaired, said, “Having written to the previous managing agents several times and got no response the change of ownership is a very positivedevelopment. At last we have a proposal which is designed to be affordable and able to be delivered in the near future.It is important that the car park is repaired so that local people do not abandon these local shops for facilities elsewhere.”

Reading East MP Rob Wilson said, “I know how much time Conservative Councillors have spent on this issue over the last few years and am pleased that at last there is a real prospect of a proper resurfacing of the car park. Many of my constituents have contacted me about this and I will be seeking a meeting with Mr Rashid in the near future to discuss his plans and offer any assistance I can.”