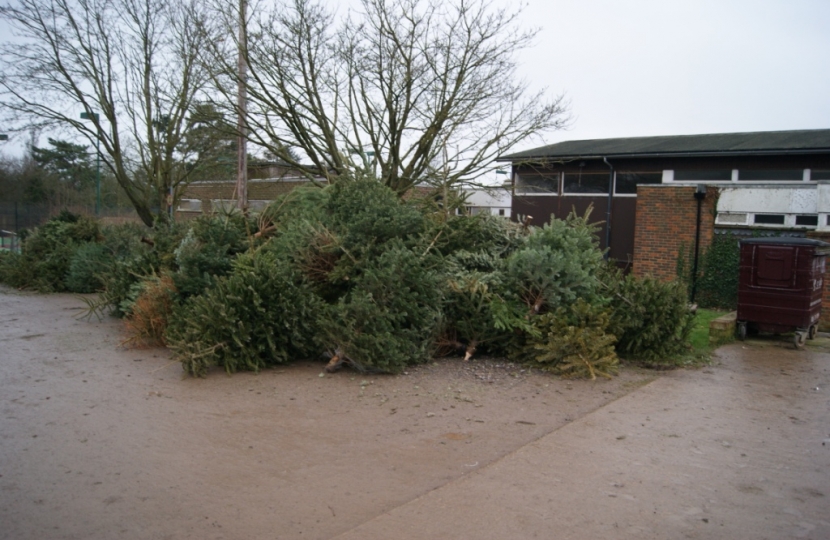 Conservatives have condemned the chaos across Reading resulting from the discarding of Christmas trees in parks and car parks across the Borough.Hundreds of Christmas trees have been taken to former collection points across Reading by residents to be recycled as in previous years.  However, Labour-run Reading Borough Council has scrapped the collection facility and has completely failed to communicate this to residents.

Conservative Councillor Isobel Ballsdon said “I was surprised to learn from a Council officer this week that the service has been axed by the Labour Administration.  No press release was issued and there is no obvious notice on the Council’s website or at the former collection points. Apparently this year the Council advises that residents should cut up their Christmas tree and put the pieces in their green waste bin or alternatively take it to the Civic Amenity Site at Smallmead but residents are clearly as unaware of this change of policy as I was.”

Cllr Ballsdon who represents Mapledurham Ward continued, “I went to Mapledurham Pavilion’s car park this afternoon and saw three massive piles of discarded Christmas trees. I understand from colleagues that the same is true at Clayfield Copse and the other former collection sites. This wasn’t a great surprise given that households were taking down their decorations by the 6th January.  The Labour administration has once again completely failed to communicate the change of policy and now any financial saving they had budgeted for will disappear due to the unplanned for cost of clearing up their mess.”

Conservative Leader Cllr Tim Harris said, “Once again Labour has failed to communicate effectively with residents. At a time when the Coalition nationally is clearing up Labour’s mess, they are wasting public money locally and letting residents down.”