Campaign to save the Henley Rd Bus Shelter 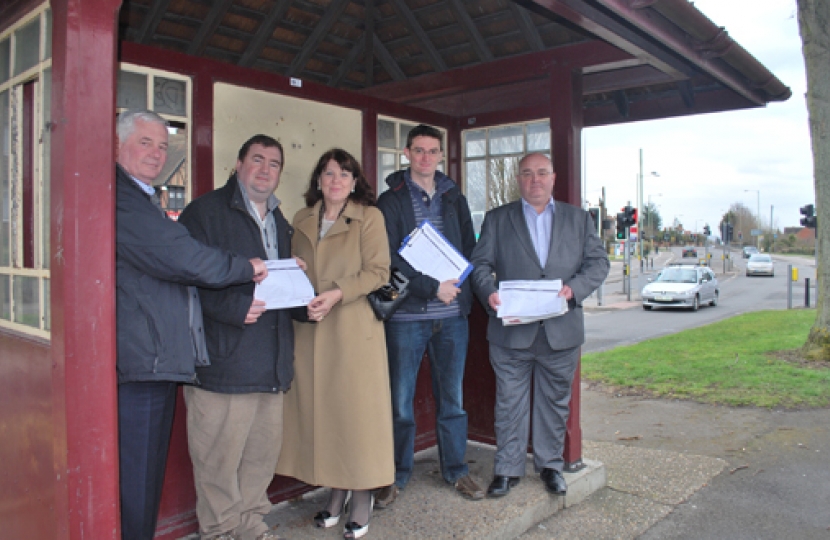 RESIDENTS of Caversham are being urged to sign a petition to stop the demolition of an ageing bus stop. The dark red bus stop opposite the Traveller’s Rest pub in Henley Road is under threat of being pulled down by Reading Borough Council, which says it is not suitable for use by the disabled and would cost too much to repair or replace.

Opposition Conservative councillors have launched a petition calling for the shelter to be retained.

Group leader Andrew Cumpsty said: “It is a lovely old shelter that goes back to the Thirties. It is in the old Reading transport colours. If it is demolished then that is another bit of Caversham history that has been taken away. The shelter is structurally sound — it just needs a little bit of love and attention. It actually provides appropriate cover and shelter and the fact that it is double-sided means that it protects against the weather. I would be very sad to see it go.”

Thames ward councillor Jeanette Skeats added: “We have been told by the council that the shelter was not well used and that the cost of having it repaired was high so that it was probably going to be demolished. It also said that the shelter is not disability friendly but with a little adjustment that could be addressed. The other reason for getting rid of it, according to Labour, is that it is draughty, but it is double-sided and there is overhanging as well. Years ago, the Masons would meet at the Traveller’s Rest and apparently they paid for it to be repaired the last time. I suppose many people coming away from the meetings would have used it. It is a primary bus stop and people are fond of it.”

Caversham ward councillor Tom Stanway said: “The council is saying that not many people use it, which is completely wrong. On Saturday morning there was at least one person standing under the shelter for each bus. It has not been specified how much it will cost to replace or repair. It would need 11 panes of glass and some felt and maybe a lick of paint. We want the shelter to be repaired and made weather-proof so people can use it more. There are also ways you could modify the shelter to allow greater disabled access. It just needs a bit of creative thinking by the council.”

Cllr Stanway said a community notice board and hanging baskets could be used to make the shelter more attractive.