Cllr Jeanette Skeats was re-elected in May 2019 to represent Thames Ward. She has represented Thames Ward since she was first elected in 1996. She has lived in Caversham for over thirty years with her husband. During her time on the Council she has been a member of scrutiny panels and committees covering most areas of the Council.

She has been the Leader of the Conservative Group since January 2014 and previously served as Deputy Leader under Fred Pugh, Andrew Cumpsty and, most recently, Tim Harris. She also served as Mayor of Reading in 2003/04.

In her first speech to the Group as Leader Cllr Jeanette Skeats paid tribute to Cllr Tim Harris for his two years as Leader and noted that she had served each of the last three Conservative Group Leaders as Deputy at one time or another.

Jeanette is the Conservative Group's spokesperson for:

She sits on the following: 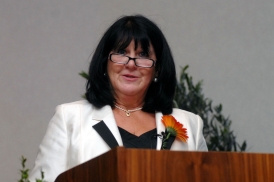