Dr Sharma is our Honorary Life President. He holds this position because of the respect in which he is held by the Association following many years of service as an officer at Association and Area level.

Dr Prem Sharma is founder-chairman of the India Development Trust, trustee of India800 Foundation, and a former advisor to the Department of Trade and Industry on promoting bilateral trade between India and the UK as part of the Indo-British Partnership. He was awarded the Hind Rattan (1991) and the Nav Rattan (1995) for outstanding services, achievements and contributions to the British Indian community. He was awarded the OBE (2010) for services to community relations in the UK.

A Veterinary Surgeon and Chartered Biologist by profession, he served as Permanent Secretary to the Kano State Government in Nigeria (1969-1976). He developed pioneering participatory approaches to community organisation, poverty alleviation, inter-community relations and disease control that have today become model strategies in the field of community development. He was Director of a major World Bank-funded agricultural project in Saudi Arabia, 1976-78, thereafter setting up his own international consultancy specialising in agriculture, trade and technology. He was on the advisory panel for the ministry of Agriculture Fisheries & Farms, 1992-96. His strategy paper ‘Reducing Poverty in Africa’ was published on the website of the Globalisation and Global Poverty Group in 2006 (revised 2007, 2011).

He has played a key role in encouraging younger people to be involved in civic, local and national political life, regardless of party politics. He is the founder patron of the Conservative Parliamentary Friends of India and was a member of a parliamentary delegation to India in 2003.

He is a passionate advocate for peace, leading various peace initiatives both in the UK and abroad, including the series of conferences initiated by SADP. He was recognised as an ‘ambassador of peace' by the Universal Peace Federation when he addressed their conference in Seoul, South Korea, in 2007. 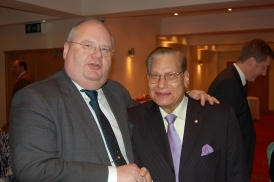 Prem pictured at an Association dinner with guest of honour Secretary of State Eric Pickles and at a campaign meeting with Rob Wilson MP.