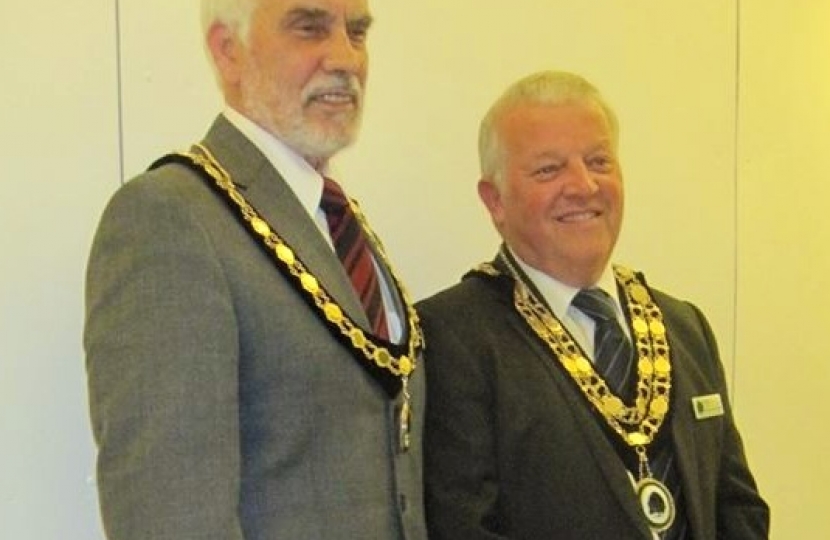 Woodley Town Council is now under Conservative control! At the Annual Meeting on Tuesday Cllr Keith Baker became the first Conservative leader of the Council in 39 years!

Woodley TC is not like most Town Councils. It has power and a sizeable budget. The average precept on the Council Tax is around £115 and overall expenditure is just under £2m per annum. With 26,000 residents, the Council provides leisure facilities and deals with the lower level issues which are delegated by the Conservative controlled Wokingham Borough Council. The 25 Town Councillors are unpaid.

At the Annual Meeting Cllr Bill Soane was elected to be Mayor of Woodley for the next year. Bill is a fantastic guy, who has been deeply involved in Woodley for many years. He is a local businessman and a key organiser of the Woodley Carnival Committee, the biggest single event in the town. Cllr Brian Franklin an Airfield councillor and resident is the new Deputy Mayor.

Cllr Keith Baker was elected to be Leader of the Council. A dynamic local politician he has worked his way up to his current position the hard way, helping local residents with their issues and campaigning for many local Conservatives across Woodley and Earley. Keith is well placed to take up the reins from Cllr Kate Haines who has ably led the Conservative Group for the several years and is now Deputy Leader of the Council.

The Conservative Group believe it's time for change in Woodley and are enthusiastically planning to implement new policies to tackle what matters in Woodley and to work with both the Independants and the Lib Dems to make the right decisions for the town.