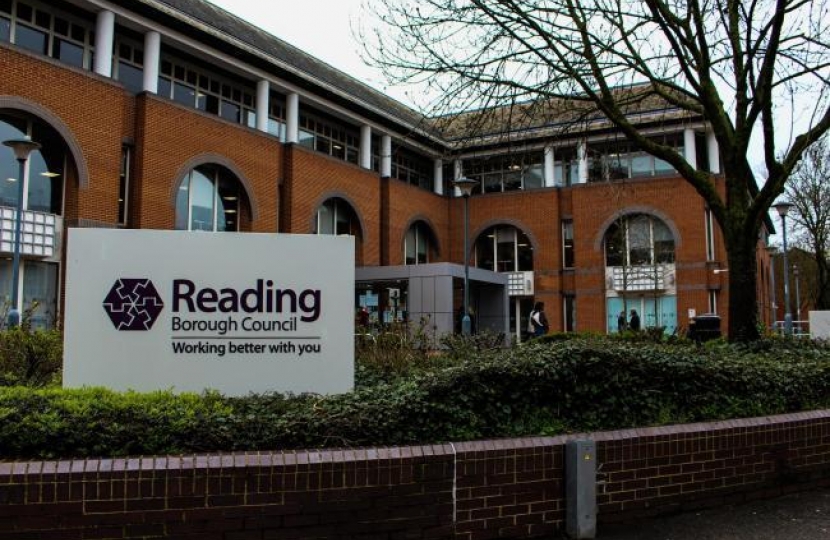 Tory Group Argues Town’s Hard-Pressed Residents Shouldn't Be Expected To Pay Such Large Increase After Being Hit By Covid Pandemic.

Conservative councillors on Reading Borough Council strongly opposed the 4.99% rise in Council Tax that was voted through by the controlling Labour Group as part of the 2021/22 RBC budget.

Speaking during the Council’s annual debate on the budget and three-year financial strategy, held online (Tuesday Feb 23rd), the Conservative Leader of the Opposition Councillor Jeanette Skeats (Thames) stressed how she and her Conservative councillor colleagues had done all they could to work together cross-party during the Covid-19 pandemic for the sake of all of Reading’s residents.

While welcoming the Prime Minister’s recent announcement of his promising plan to ease the country out of lockdown, given the extraordinarily difficult past year, Cllr Skeats thanked all of RBC’s Officers and Staff for keeping the town’s vital public services going, in particular Elderly Care, street cleaning and refuse collection, despite a massive fall in Council income from fees, charges, penalties and sales.

As Conservative Group Leader, however, she made it clear the Tories would be voting against the Labour administration’s Budget as, due to the Government’s generosity in supporting RBC during Covid-19, the Council had not, in fact, been left worse off due to the pandemic.

Referencing the fact that the pressures of Covid-19 had resulted in an estimated £19.2m overspend on the General Fund, Cllr Skeats pointed out that RBC had received £16.6m from Central Government during 2020 along with a further Government grant of £3.5m last December. RBC, she noted, had also been swift to take advantage of the Government’s furlough scheme for a number of its staff.

She highlighted the fact that to set a balanced Budget for 2021/22 the Labour administration was now having to rely on drawing £3m from RBC’s financial reserves which, she said, was clearly not a sustainable position, so further spending reductions would still be needed in future years.

Cllr Skeats said that while she fully understood the pressure on public services, given the current economic circumstances, the 3% Adult Social Care component of the proposed council tax increase, in particular, would have been resisted if the Conservatives had been in control of the Council.

In opposing Labour’s 4.99% council tax increase, Cllr Skeats stressed that the Conservatives were acutely aware how extremely difficult things had been for Reading’s businesses and families and that, even with such Central Government assistance, many of the town’s residents were still facing hardship.

The Conservative Deputy Leader of the Opposition, Councillor Jane Stanford-Beale (Peppard) also thanked the Council’s officers and staff for all their hard work during the pandemic and praised all of the region’s emergency service workers, before offering her condolences to everyone in the Borough who had suffered bereavement as a result of Covid-19.

She, too, pointed out that the Government was very swift to react when the country went into its first national lockdown a year ago, by providing money for Personal Protective Equipment (PPE) to improve infection control and funding to maintain leisure facilities, re-open the high street and to give council tax relief for Reading’s most vulnerable households.

However, Cllr Stanford-Beale said that as the Labour proposals included a council tax rise of 4.99% for this year, next year and the year after, they could not be supported by the Conservatives as Reading’s residents could not be expected to pay such an increase in their council tax when they have already been hit so hard by the economic impact of Covid-19.

Conservative Councillor Paul Carnell (Thames) said he knew how many of Reading’s residents would be worried about their household finances, possible job losses and pay freezes, so an inflation-busting council tax rise now was not justified. He said he would be opposing the budget as he, too, felt there were more savings that could be identified and made by Labour, not least over home improvement grants, agency costs and environmental improvements to RBC vehicles.

Conservative Councillor Simon Robinson (Peppard) acknowledged and paid tribute to the great work done by the Director of Children’s Services and her team at Brighter Futures for Children, as well as to all schools, heads, teachers and assistants and everyone involved in looking after the town’s children.

He noted and welcomed the significant milestone of Reading’s children’s services recently being taken out of special measures after 5 years of great work, not least during the difficulties of Covid-19 over the last year. However, he also highlighted the ongoing severe shortage of suitable, local placements for children in care and called for more potential local foster families or foster carers/parents to consider coming forward.

Addressing Adult Social Care specifically, Conservative Councillor Isobel Ballsdon (Mapledurham) praised all of the staff in Reading’s Adult Social Care team for the exceptional way they had coped over the last 12 months, not just with the highly demanding challenges of their front-line duties, but also in their home lives. It was important, she said, that they know how much their work is appreciated by all RBC councillors.

Cllr Ballsdon concluded that councillors must be able to scrutinise properly how the Adult Social Care element of council tax is spent, so that there could be no way of such ring-fenced money simply being used elsewhere to fill holes in Labour’s budget. Reading’s Conservatives would be voting against the Budget and its 4.99% council tax increase for residents during such a critical time.

Our Plan for a Stronger Economy

Read about how our plan is tackling inflation and helping you with the cost of living.