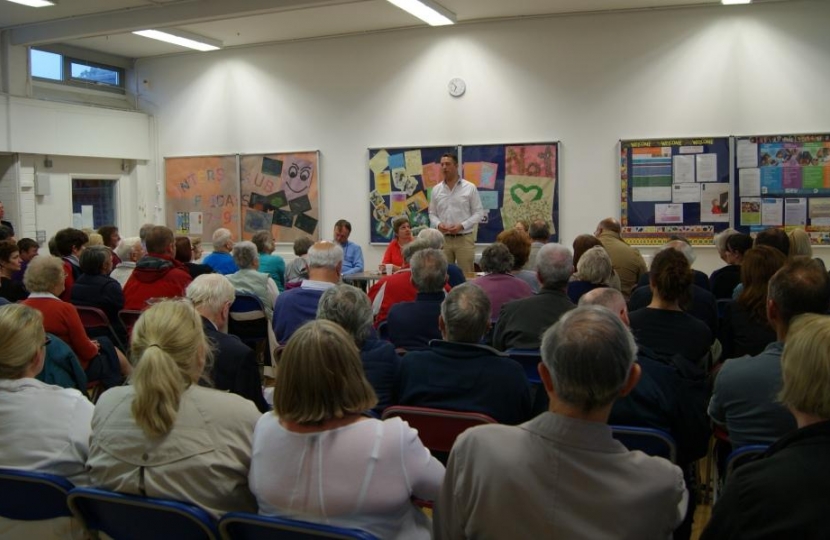 Peppard's Conservative Councillors arranged a meeting tonight at the Emmer Green Youth & Community Centre and a large audience of concerned local people heard Deputy Transport Head Ruth Leuillette explain the Council’s thinking behind the proposed Micro Park and Ride scheme at Clayfield Copse. She then fielded questions from over 100 local residents who raised objection after objection to the Council’s plan.

Speakers were asked to introduce themselves and it was clear that as well as many local leisure users of the car park there were many nearby householders who had serious concerns about the implications for their roads, the access to their properties and the effects of increased traffic on children walking to the many schools in the area.

Cllr Richard Willis, who had organised the meeting, chaired the proceedings. He said “I tried to let as many people as possible speak and get their view across. In the absence of information to date it was a very important opportunity for many people to hear the facts and raise their concerns with senior transport officers. There were many questions which could not be answered and some new concerns were raised which will need to be addressed. We want to see proper park and ride sites on the main roads into Reading but this is the wrong place for this scheme. ”

Cllr Jane Stanford-Beale said “The numbers attending were a good indication of the strength of feeling across Caversham about this plan. Richard and I will be presenting a petition to Cabinet on 16 July which will be in addition to the 50 or so objections we passed to Council Officers this afternoon. I hope that by all working together we can get this plan thrown out altogether.”

At the start of the meeting many people queued to sign the local Conservatives’ petition against the park and ride scheme.