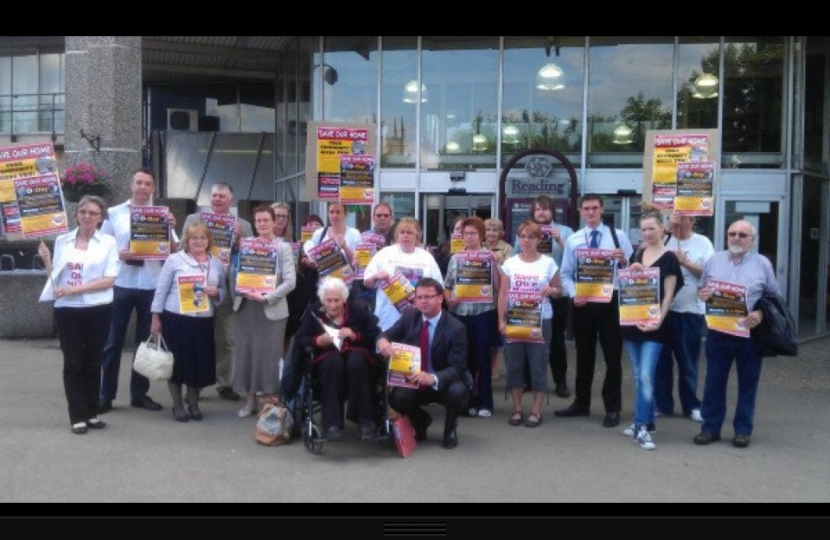 Conservatives turned out in force for tonight’s first ever meeting of the Adult Social Care, Children’s Services, and Education Committee in support of campaigners who packed the public gallery. As well as Cllrs Isobel Ballsdon (Mapledurham), Sandra Vickers (Tilehurst) and James Anderson (Kentwood) who sit on the committee, Cllrs Tim Harris (Church), Jeanette Skeats (Thames), David Stevens (Thames), Ed Hopper (Thames) and Richard Willis (Peppard) sat in the public gallery behind them with Reading East MP Rob Wilson. Cllr Hopper and Rob Wilson addressed the meeting as members of the public after passionate speeches from campaigner Colin Trinder and Rev Marion Pyke.

It was notable that neither Cllr Richard Davies (Caversham-Labour), or Labour’s Reading East Parliamentary Candidatespoke or even bothered to attend the meeting.

After over an hour and a half of questions, speeches and debate Labour’s Lead Councillor circulated a pre-prepared amended motion which made it clear that the decision to close both the Arthur Clark home and Albert Road Day Centre had already effectively been taken. Cllr Ballsdon picked this up and pointed out that since the motion had been printed prior to the meeting the whole debate had been a waste of time as the Labour Group had already decided to close the two facilities.

Cllr Sandra Vickers spoke about how her own mother had visited Arthur Clark and told how she loved the home and the quality of care provided. Cllr James Anderson urged the Labour administration to consider this a matter for their hearts rather than their heads.

However, at the end of the debate, the Labour Councillors on the Committee voted for the motion to close Arthur Clark Home and Albert Road Day Centre. All other Councillors (apart from the Chairman who abstained) voted against the closure motion.

Cllr Ed Hopper said, “I am hugely disappointed by the decision to close the Arthur Clark Care Home which has been taken by Reading Borough Council’s Labour Administration tonight.

Over 3,600 Reading residents plus every Conservative Councillor, our MP Rob Wilson and all other opposition Councillors have all expressed their adamant opposition to this closure.

The consultation which RBC has undertaken is not worthy of the name, having ignored genuine opportunities to work with local residents and businesses to seek ways to keep this valuable Home open.”

Cllr Tim Harris said, “Once again the Labour Group has ignored the wishes of the thousands of local people who signed the petition and those who took time out to attend a second Council meeting to discuss the proposed closure. Weasked the Labour administration to consider all options including discussions with possible private care providers but they chose to ignore this and the pleas from the public gallery.”

Cllr Isobel Ballsdon said, “Labour is quite prepared to spend around £60m on providing new Civic Offices but they refuse to find less than £1m to undertake the maintenance backlog which has been identified at Arthur Clark home. Tonight’s meeting was a waste of time as Labour had already made their decision before the meeting even started. The consultation was a sham, just as the promised consultation on using the site for ‘extra-care’ housing for the elderly will probably prove to be.”

Speaking after the meeting Conservative Councillors and Rob Wilson MP pledged to help the residents in any way possible to keep up the fight for the future of Arthur Clark home and Albert Road Day Centre.